Scrap tyres make a significant contribution to the generation of waste. There are 2-3 billion scrap tyres stocked in US, a figure which represents the cumulative scrap tyres generation of approximately 10 years. For EU Member States, it is reasonable to assume illegal or semi-legal scrap tyres accumulation in the same order of magnitude.

In response to the environmental problems and health hazards posed by the countless uncontrolled and abandoned scrap tyres piles around the world, most industrialized countries have put in place a legal framework to address this issue. Regulations vary from country to country, but the main thrust of such legislation is to require the removal of abandoned piles, provide for the environmentally safe disposal of newly generated waste tyres and also support new applications for tyre-derived material through the use of government grants.

The most noticeable problem associated with large tyres piles is the fire hazard they present. Once a tyre pile catches fire, it is very hard, if not impossible, to extinguish. In some instances, tyres piles have been burning for several months with the black fumes being visible for many miles. Diseases such as encephalitis and dengue fever have also been reported around scrap tyres piles, particularly in areas with warmer climates which are an ideal breeding ground for disease-carrying mosquitoes.

Scrap tyres disposal statistics
Statistical data on scrap tyre generation and disposal are published by a number of organizations, most prominently the US Rubber Manufacturers' Association and the European Tyre Recycling Association (ETRA). Figures 1 and 2 give an overview of the current routes of disposal for scrap tyres in the US and Europe, while Table 1 presents the amounts directed through each source (though these figures should be regarded only as approximate values).

The different disposal methods are looked at below.
FIGURE 1. Scrap tyre disposal routes in the US, 2000-2001 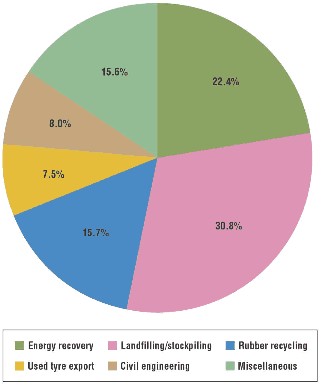 Energy recovery
While uncontrolled tyre fires cause substantial air and ground pollution, the incineration of whole tyres or tyre chips in industrial furnaces is environmentally safe. The calorific value of tyre-derived fuel (TDF) exceeds that of coal, while the sulphur content is in the same order of magnitude or even lower.
The use of TDF as a fuel supplement in cement kilns, paper mills or power plants is a perfectly reasonable use for scrap tyres, if the safe disposal of large amounts of scrap tyres is the primary objective. However, a closer look at the energy invested into the production of tyre rubber indicates that reusing the material for originally intended (or related) purposes is the preferred option, both environmentally and economically.

As shown in Table 2, the energy recovered from TDF is just a fraction of the energy invested into the production of tyre rubber. This correlation is clearly reflected in the market prices for TDF (US$30-50 per tonne) and crumb rubber from scrap tyres (US$180-300 per tonne).