Is pyrolysis bad for the environment?

Pyrolysis projects usually use pyrolysis technology to recover waste tires or waste plastics into crude oil, which involves chemical changes. If you can handle all the processes well, there will not be any pollution to the environment. Doing waste pyrolysis plant mainly consists of pyrolysis reactor, condensing system, tail gas purification system, water film filter and desulfurization tower, oil collecting devices and slag discharging system. Now let me give you more details about environmental protection devices of Doing waste pyrolysis plant. 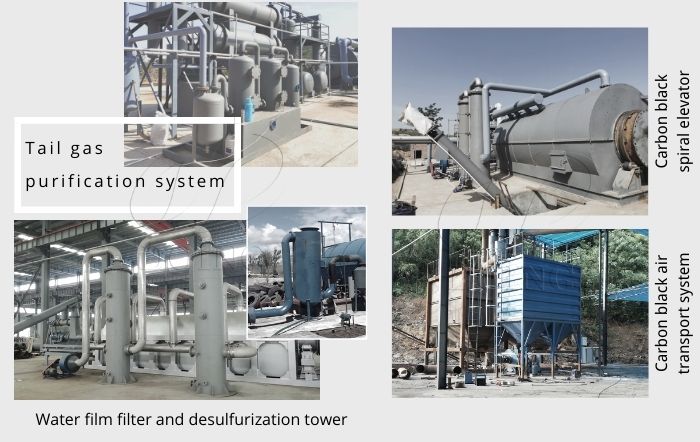 When all the oil and gas are cooled into oil, there will be some uncondensable syn gas, which can be used for combustion to heat the reactor to save fuel. However, if the tail gas is burned directly, it produces an unendurable odor. This will not only damage the health of workers, but also cause complaints from those around them. Therefore, you’d better equip the tail gas purification device to remove harmful gases such as hydrogen sulfide in the exhaust gas before combustion, and then use it in the combustion heating reactor, so as to solve the odor problem of the factory.

When the fuel is burned to heat the reactor, it produces some smoke. If discharged directly, it will cause air pollution. Therefore, the water film filter is needed to discharge the dust and particles in the flue gas. It can meet the environmental protection standards of developing and less developed countries. But for some developed countries with higher environmental protection standards, a higher level of desulfurization tower is needed, which can remove dust and sulfur compounds.

If you wanna to get more details about Is pyrolysis bad for the environment?, you can send E-mail to oilmachine@wastetireoil.com. Or you can consult our professional engineers and specialized sales team by leaving a message in below form. We will contact you ASAP, once we got your message.