What pyrolysis reactor material is better for long usage life?

For pyrolysis project, the machine’s quality is very import to ensure long usage life. So pyrolysis reactor as the key point of pyrolysis plant is priority among priorities. 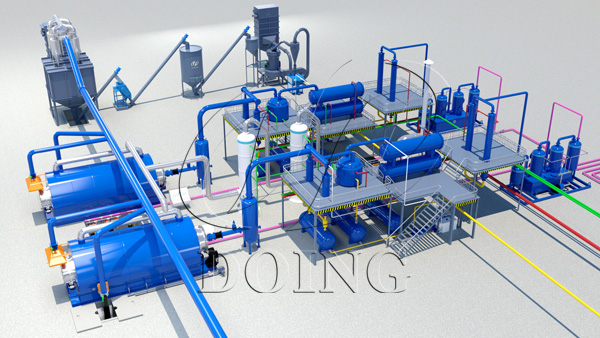 So when we DOING company choose the material of the pyrolysis reactor, we carefully compare the characteristics of different materials to ensure long usage life for the pyrolysis plant.

And silicon, manganese characteristic is influence factor for weldability. The weldability of steel is closely related to its alloy composition, like silicon and manganese. The biggest impact is on carbon. As the carbon content in the steel increases, the plasticity will decrease and the hardening tendency will increase, which will lead to cracks in the welding process.

For the above formula, you can calculate the carbon content. As previously mentioned, the silicon content and manganese content of Q245R are both less than Q345R, and other elements are same. Therefore, according to the above calculation formula, the carbon equivalent of Q245R is 0.37 and that of Q345R is 0.47.Therefore, it can be known that Q345R contains more carbon and is less weldable than Q245R. So, in the process of welding, cracks are more likely to occur. And Q245R could keep long life use by this good weldability.

However, precisely because the manganese content of Q345R is higher than that of Q245R, the strength of Q345R is better than that of Q245R at the same temperature and the same thickness of steel plate. Because the higher the content of manganese element, the acid and corrosion resistance of the material can be guaranteed, so Q345R with longer life use in acid and corrosion situation than Q245R.

Welcome contact with us to customize your own special machine!

PREVHow to make plastic pyrolysis reactor design to keep safe and stable?
NEXTWhat are the advantages of fuel oil from plastic waste, does it have disadvantages?

If you wanna to get more details about What pyrolysis reactor material is better for long usage life?, you can send E-mail to oilmachine@wastetireoil.com. Or you can consult our professional engineers and specialized sales team by leaving a message in below form. We will contact you ASAP, once we got your message.