What is the working process of used engine oil refinery plant? 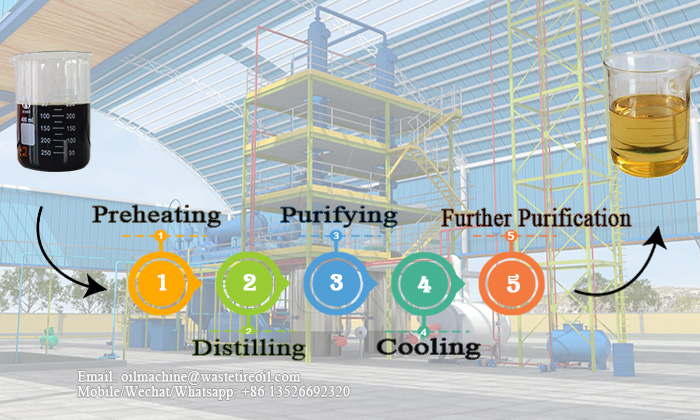 Using direct and indirect heating system to heat the used motor oil which is pumped into the distillation reactor, The first thing that comes out is emulsifiable concentrate and moisture, then the oil gas will be produced gradually with the temperature rising.

There will be two catalyst towers above the distillation reactor which includes ceramic balls and a kind of catalyst, the heavier oil gas will be purified after passing the catalyst towers.

The purified oil gas will be cooled down to liquid oil by two horizontal condensers which can make sure the cooling effect, Doing used engine oil refinery plant can make sure 85% oil yield.

Generally, the diesel fuel you get from the condensing process can be sold to the market, but if you want to sold in higher price, you can do the further purification to get diesel fuel with light yellow color.

Except the 80%-85% diesel fuel you get from waste motor oil, you also can get other product-15%-25% asphalt, which can be used to paving or sold to asphalt plant to refining. 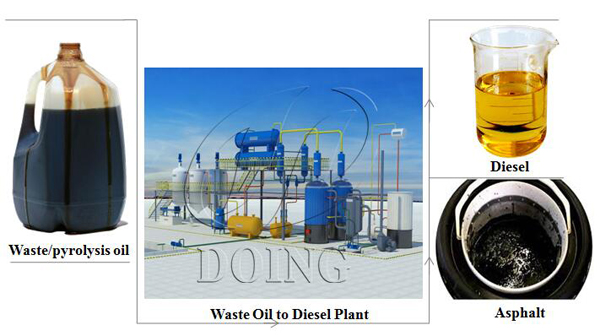 Now, you should have a clear understanding of the working process of used engine oil refinery plant. If you want to join this profitable business, welcome to contact with us, our product manager will give you some advice according their rich experience.

If you wanna to get more details about What is the working process of used engine oil refinery plant?, you can send E-mail to oilmachine@wastetireoil.com. Or you can consult our professional engineers and specialized sales team by leaving a message in below form. We will contact you ASAP, once we got your message.